Saltfishforty are a fresh and dynamic duo hailing from the Orkney Islands in the north of Scotland. Douglas Montgomery (fiddle/viola) and Brian Cromarty (songs/guitar/mandola) combine the rich traditional music of Orkney with original compositions. The duo have four previous albums to their name: LIVE (2013), Netherbow (2010), Orkney Twister (2005) and Goose Music (2003).

The powerhouse partnership have won a devoted following throughout the UK and beyond, brilliantly transcending the duo format’s conventional confines. Linchpin figures in the currently flourishing revival of Orkney’s traditional music, they unite these deep-rooted sources with an exhilarating breadth of influence and expertise, catalysed by a creative empathy born from decades of friendship.  The result is a sound of equally thrilling raw attack and multi-dimensional richness. 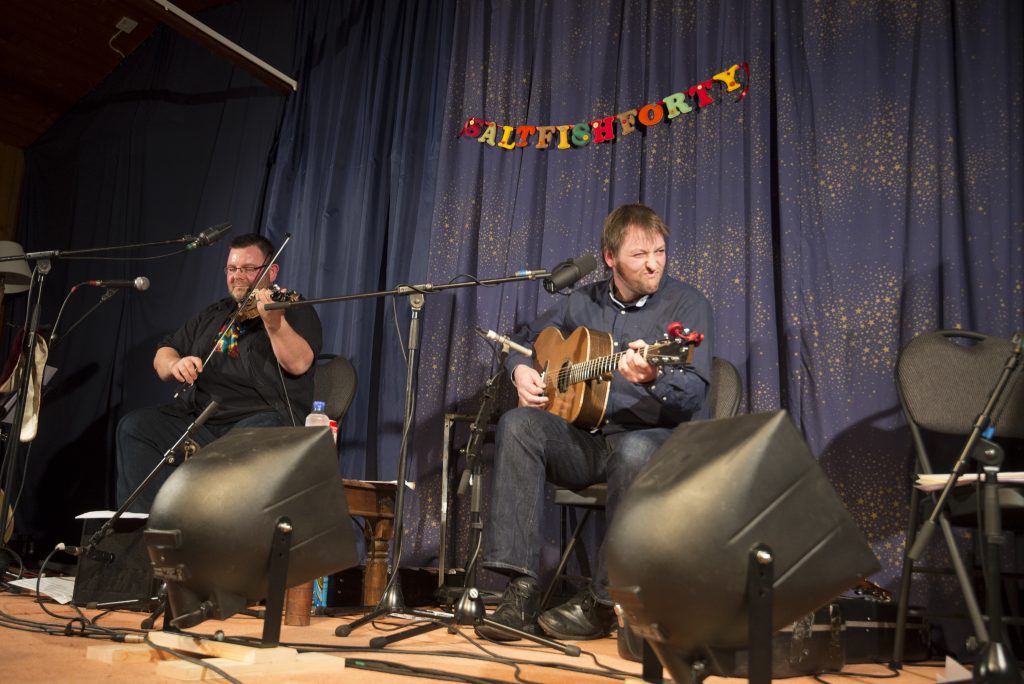 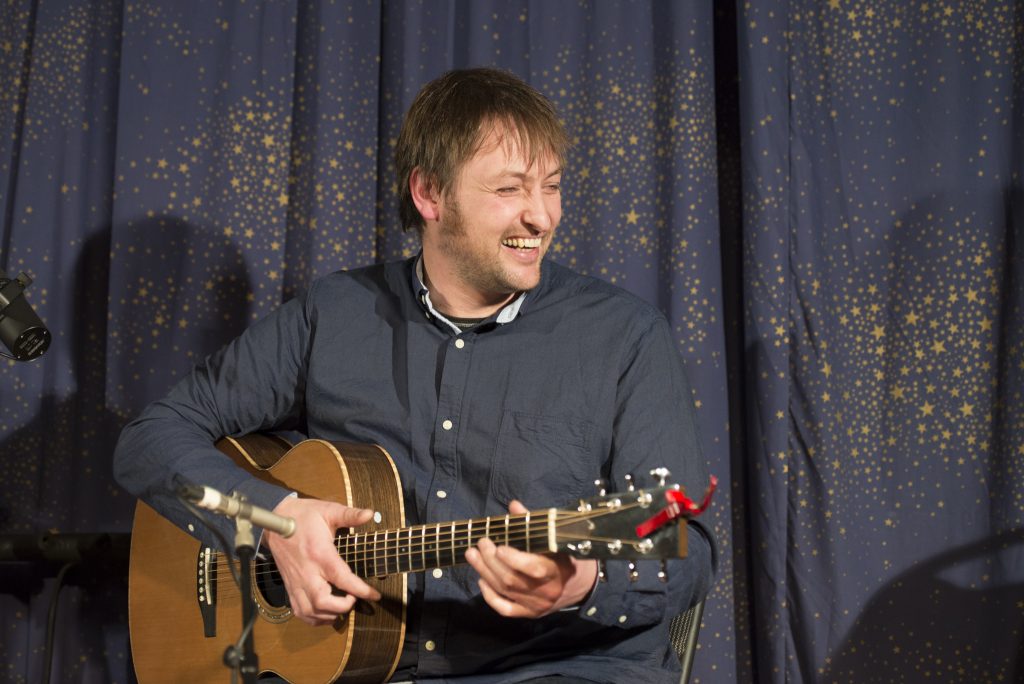 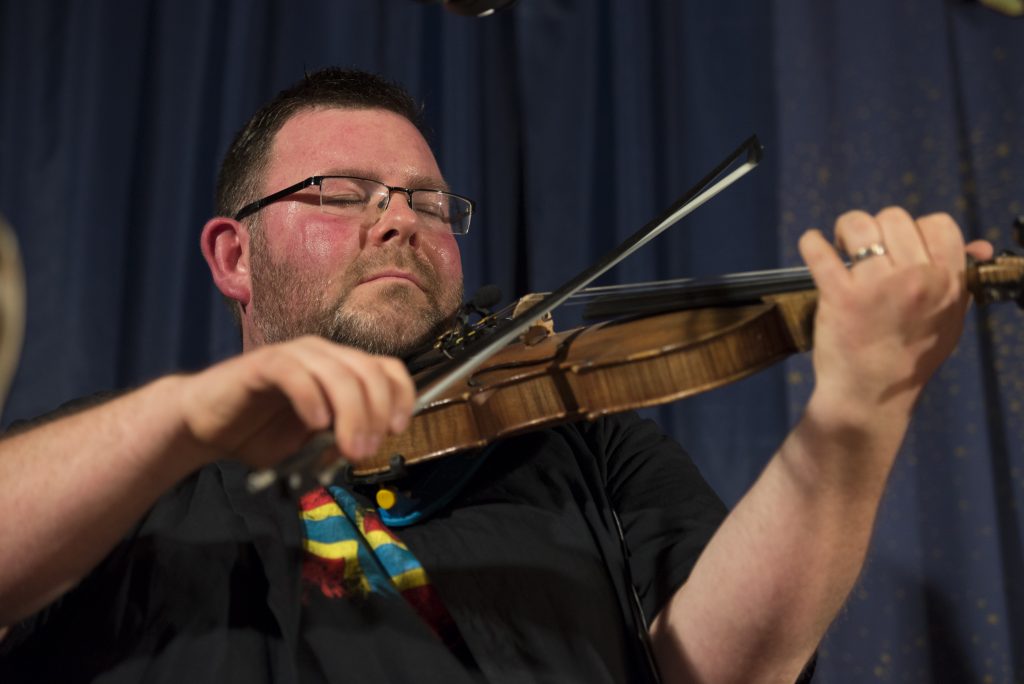 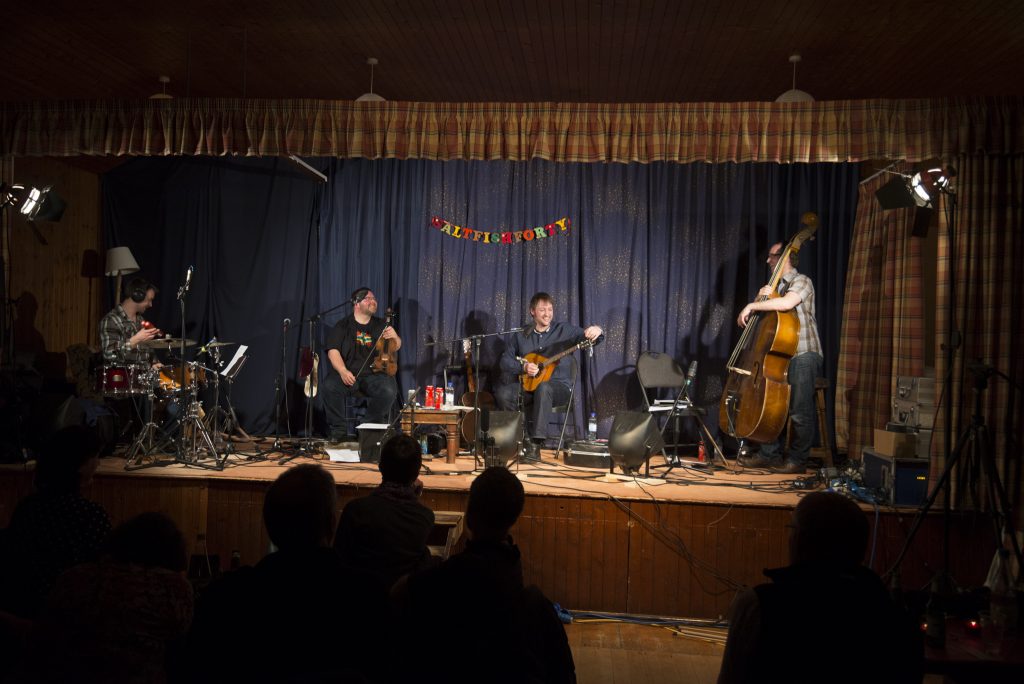 A partnership forged back in 2002 – more by accident than design – the two knew each other since primary school, and played together in sessions and various bands, until they were booked in a four-piece for a charity gig, and only the two turned up: “We decided to go on and just make as much noise as two people possibly could – which is kind of how it’s been ever since” they say.

Years later, Saltfishforty have delighted audiences at many of the world’s top folk festivals including Celtic Connections, Cambridge, HebCelt, Shetland, Lorient in Brittany and Canada’s Celtic Colours, as well as touring to the US and throughout Europe. Their focus on Orkney music takes in traditional, contemporary and original material, boldly cross-fertilised with influences from Americana to East European folk, plus a high-octane whiff of heavy metal.

Bere is a six-row barley unique to Orkney. It has been grown in Orkney for thousands of years, and is a staple in the form of bere bannocks and home brewed ale (both most excellent served with saltfish). It’s thought to have been brought to Orkney by the vikings in the 8th century.

A distinct island harvest, synonymous with good home fare, and a nod to their Scandinavian ancestry – the story of bere chimed with the music they grew up with, and the sound and identity they aspire to. They liked the sound of the word too, relating as it does, to the stripped back approach they’ve taken on this album.

The collection of songs and tunes on Bere showcases the diversity of musical influences in our islands. Scottish tunes with a Scandinavian twang, lilting rhythms that reflect the rolling island landscape and gentle dialect. Shot through with hints of jazz, swing and blues. At the centre of a North Atlantic crossroads, Orkney has imported and exported musical influence aplenty. For every tune that made it across the Atlantic, two or three came back. This mixing of genres is integral to the Saltfishforty sound – traditional at heart but with enough grunt to see the band as regulars at both local Rock and Blues festivals.

Kicking off with one of seven instrumental sets, the opener, Whisky, comprises four favourite reels finishing on a Shooglenifty favourite. Mad  is a Strathspey and Reel set, featuring three of Douglas’s compositions, including a tribute to his great uncle, lost 100 years ago in The Great War. Eileen’s is a gentle hornpipe written for Brian’s wife. Birds comprises three original tunes featuring the signature saltfishforty growl, while the Picky set showcases Brian’s shiny new mandolin on a set of Irish jigs

There are five songs on Bere, including a ‘salted’ version of Old Man Luedecke’s Tender is the Night, swing classic You’re Tired of Me and two originals, The Odin Stone – the true story of a monumental act of vandalism on Orkney’s standing stones, and The Jack Snipe: In the 1960s, a retired trawler skipper made a deathbed confession, revealing the fate of the Orkney schooner Jack Snipe and her crew in 1907.

The last album was recorded with a band, so for this one they were keen to get back to basics, to playing as a duo, and to a sound that can be recreated in a concert setting. To that end, they challenged themselves to record the whole thing very quickly (in two days at the fantastic Castlesound Studios in Pencaitland), to capture the immediacy, impact and excitement of their live performance in the studio setting. 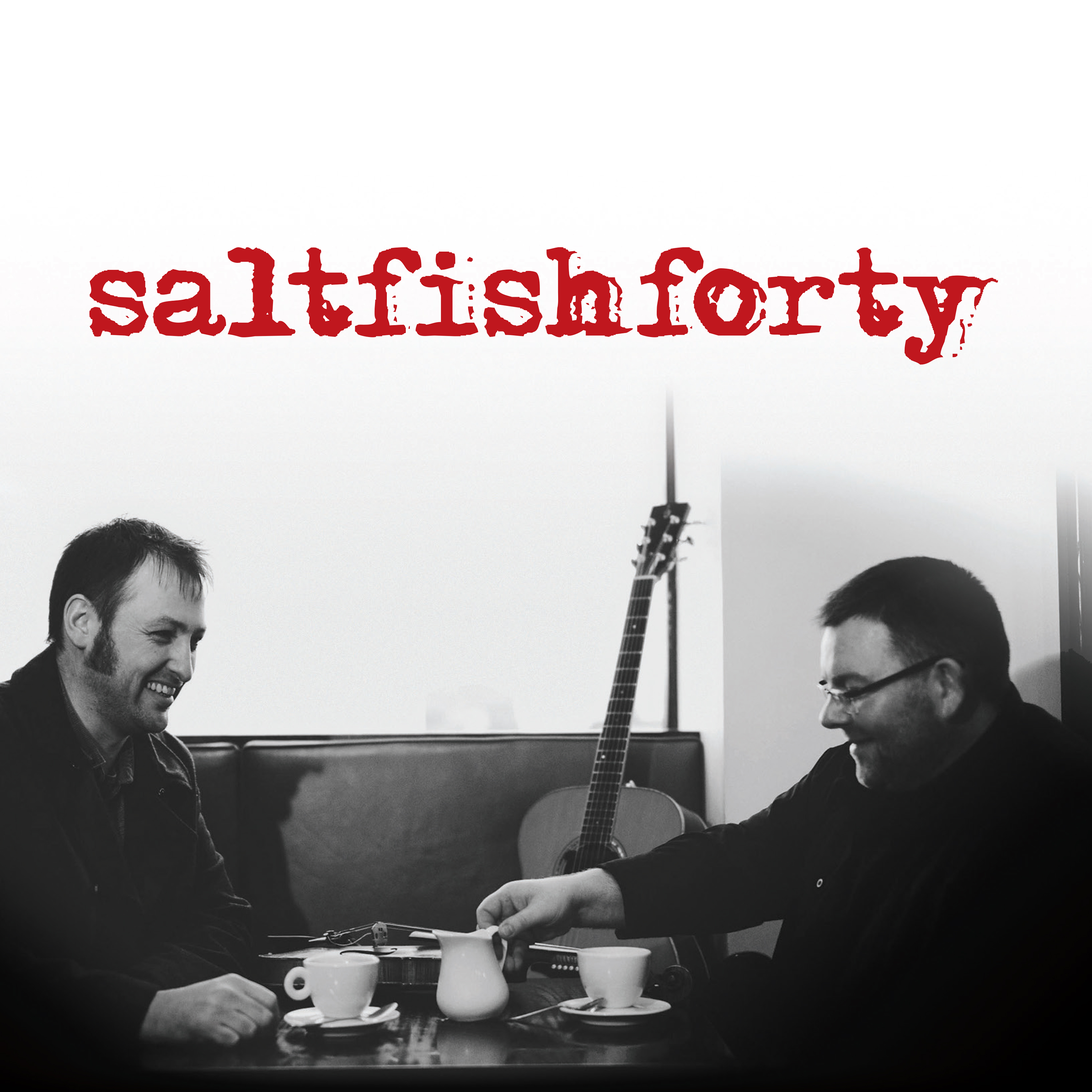